akh43 wrote: ↑
Wed May 15, 2019 12:58 am
Re pm messages, I just went to reply to one, but instead of it automatically having the sender's name already in name box I had to type it in. In the old days it was automatically there and often we had multiple recipients and there was an option to reply to all, but I could not see that either. Am I missing something?

Yup, as Steve says the user being replied to is below the large empty box. By comparison, pretty small and easy to miss!

Somewhere along the line I've picked up the notion that maybe new phpbb sends out another notification when a subscribed post is edited. I hope not. It might just be as a result of my settings tweaking last night, switching to SMTP and back.

On that subject, I'm actually feeling good about the prospects described here, so I'll leave everything as-is for a few days until I can effect those.

Oh, and thanks for the responses on mobile OS and browsers. Reason I ask is there's a pa*d extension that allows for push notifications (on phones and desktop). Not only in all likelihood a great deal more reliable than emails, but also more modern.

The drawback is that iphones don't support it. Here's the list of supported browsers: 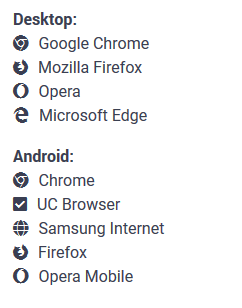 The other drawback is the push notification settings don't display for me when I try the demo on mobile. But then, my phone has a pretty effective ad-blocker installed that may be responsible.

If anyone wants to try out the demo on different devices, that would be very helpful as this is an inexpensive extension that could be very good for (some of) us. I'm especially interested in anyone who can test this out for me on android.

Quick poll of who would/wouldn't want and benefit from this extension per the browser support above and general inclination?
Top 50 Poster!
Top

Yeah, I posted then deleted something in this thread, sorry
Top 50 Poster!
Top

You of all people!
Top 50 Poster!
Top

Not currently working on this while I wait to set up the SMTP.

My issue is that I should be seeing the extra settings on the notifications pane, as per on desktop: 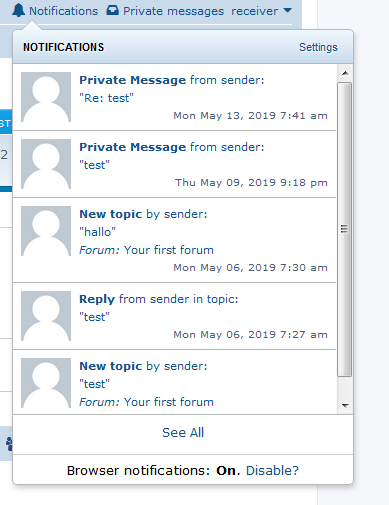 But on mobile, there are no such extra options in the dropdown or the notifications settings in the UCP:

Would really like to know if it's just me.

Return to “This Site”